Ecosystems are made up of a number of biotic and abiotic components that work together to form a whole. The structure and composition are influenced by a number of interconnected environmental factors. Variations in these variables will cause dynamic changes in the ecosystem. Soil, atmosphere, solar radiation, water, and live organisms are some of the most important components.

The idea that living entities interact with every other factor in their local environment is central to the ecosystem concept. “Any unit that includes all of the organisms (ie: the “community”) in a given area interacting with the physical environment so that a flow of energy leads to clearly defined trophic structure, biotic diversity, and material cycles (ie: exchange of materials between living and nonliving parts) within the system is an ecosystem,” said Eugene Odum, one of the founders of ecology. Species in the ecosystem are connected and reliant on one another in the food chain, and they exchange energy and matter with one another and with their surroundings. The human ecosystem concept is based on the human/nature dichotomy and the notion that all species are biologically dependent on one another as well as the abiotic components of their biotope.

Does ant drink water or not? 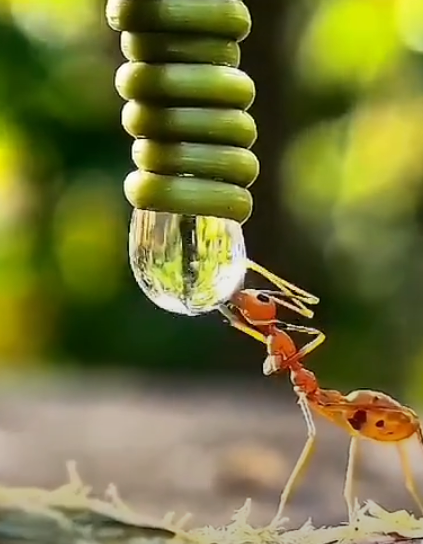 Ants are drawn to what they require to survive and feed their bodies. Many things in the world, including ants, are built on the basis of water. Ants don’t require a lot of water; in fact, the food they eat often suffices to fulfill their thirst for water.

Ants have also been observed using “tools” to collect more water and sweet liquids than they could carry in their crops. Pogonomyrmex ants have been observed tossing sand into liquid meal and then carrying it back to their colony. Aphaenogaster ants use plant material as sponges to absorb and transmit liquids.

Majority of species are unable to swim. An ant’s body, on the other hand, repels water, allowing them to float on top of it. While their legs aren’t designed for the kind of forward motion we’d expect from a dog swimming in water, they’ll try to awkwardly kick themselves around with them.
While ants are unable to swim, they are resourceful animals. If floodwaters engulf their territory, fire ants may form a raft by joining their legs together. The ants become much more buoyant when they cluster together like this. The fire ant raft may swiftly rise to the surface if it is immersed underwater. As a result, these ants may float for as long as they need to until they can build a new home on dry land.
Even though most ants can’t swim, they’re resourceful critters who know how to survive in water. They’ve also developed some incredible adaptations to help them stay alive. 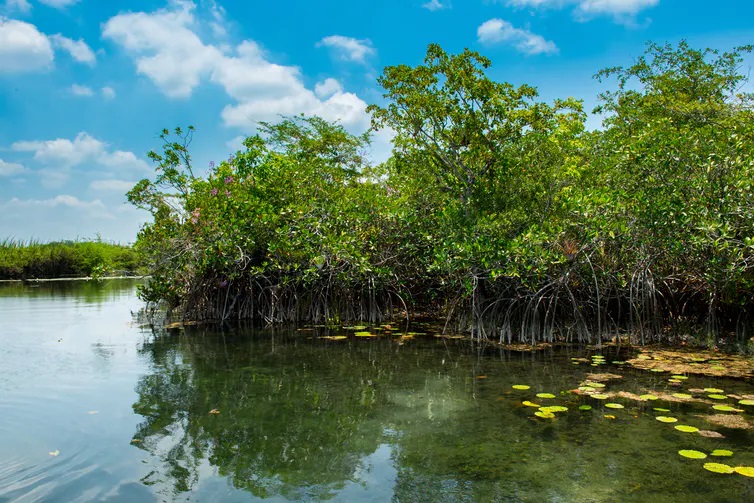 The San Pedro River flows through the Yucatan Peninsula in eastern Mexico, starting in the Guatemalan jungles and ending in the Yucatan Peninsula. This tranquil river widens into a succession of slow-moving lakes there. Thousands of red mangroves – plants often seen near tropical coastlines – adorn the river’s banks and moderate cascades over a secluded 50-mile (80-kilometer) stretch.

These trees, unlike mangroves elsewhere, grow in freshwater. This means that orchids, bromeliads, and other air and land plants that cannot endure the saltwater conditions where red mangroves are generally located can coexist with them.

Researchers from Mexico and the United States compared these trees to others found around the Yucatan Peninsula. They also looked at sediment cores from the San Pedro River terraces, which revealed that the sediments were formed in coastal environments.

The river mangroves have been separated from the coastal mangroves for roughly 120,000 years, according to researchers. This is roughly 125,000 years ago, during the Last Interglacial, a warm time between ice ages when glaciers and polar ice caps melted almost completely.

The Earth was even warmer at the time than it is now, and sea levels were 20 to 30 feet (6 to 9 meters) higher. The ancestors of these mangroves were coastal trees that became isolated as the globe cooled during the Wisconsin Glaciation, which was the last time glaciers extended over North America. Sea levels lowered as the glaciers extended, revealing more land around them. This once-in-a-lifetime forest is now threatened by deforestation and development, which could prohibit scientists from examining it for further information about Earth’s climate history.

The red mangrove (Rhizophora mangle) is a globally significant tree for commercial and artisanal fishing. Juvenile fish seek refuge amid the tangled roots of mangrove trees, where they feed and grow until they are large enough to avoid predators.

Research focused on two inland lagoons near the Caribbean coast that were formed by gigantic cenotes, which are natural sinkholes in Yucatan’s limestone bedrock. Red mangroves reproduce by dropping seeds onto a bank or into the water, where they sprout and spread to neighboring banks. Despite the fact that most seeds are toxic to saltwater and germination is difficult, this adaptation allows mangroves to proliferate throughout coastlines.