What is the cause of the snowfall in Sahara? 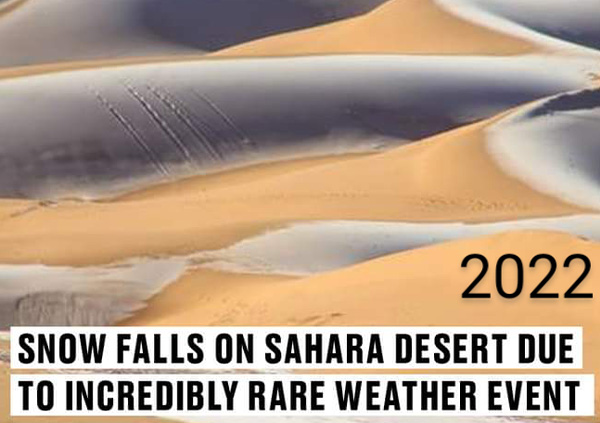 For the fifth time in 40 years, snow has fallen in the Sahara Desert. Snowfall is unusual in the region, but it is not unprecedented.

Two unique weather conditions are required for snow to form: cold temperatures and moist air. The occurrence of snow is due to a unique mix of atmospheric air circulation and the nature of the land surface where the snow falls.

Because of the bare desert surface and cloudless skies, the Sahara regularly sees exceptionally high temperatures (above 50°C). However, low temperatures are occasionally recorded (especially at night). During the northern hemisphere winter of 2005, Algeria experienced a maximum temperature of -14°C.

The Sahara is the largest hot desert on the planet. Algeria, Chad, Egypt, Libya, Mali, Mauritania, Morocco, Niger, Western Sahara, Sudan, and Tunisia are among the 11 nations in northern Africa that make up the region. It is surrounded on the west by the Atlantic Ocean, on the east by the Red Sea, on the north by the Mediterranean Sea, and on the south by the Sahel Savannah.

Winter air circulation patterns pull cool, moist air from the Atlantic and Mediterranean towards the northern Sahara. As a result, the Saharan fringe receives more winter precipitation this season.

Rising air can cool, condense, and freeze to form snow crystals and, eventually, a blanket of snowfall over higher ground, such as the Atlas Mountains of Morocco and Algeria. Snow can linger and not melt away if the land surface is also chilly.