After killing 250 dogs in ‘Revenge’ Killings, monkeys were captured in an Indian town 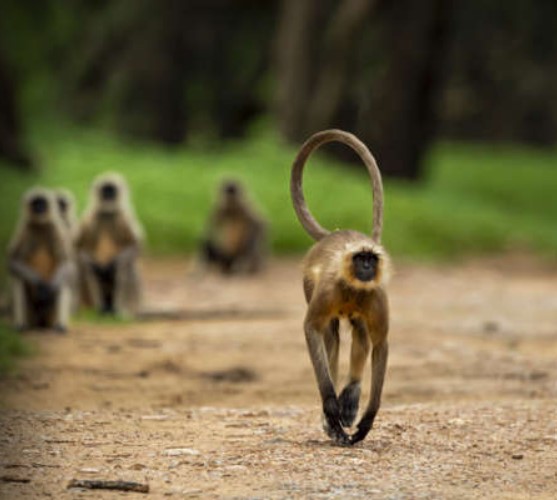 Authorities in India have apprehended two monkeys after they killed 250 dogs in “revenge” assaults following the loss of a newborn monkey.

The monkeys were captured on Sunday and released in their native habitat, according to forest department officials in Maharashtra’s Beed district. “A Nagpur Forest Department team in Beed has captured two monkeys involved in the killing of many puppies,” Sachin Kand, a Beed forest officer, told India’s ANI news agency.

The monkeys were taken to and released in a forest near Nagpur. The monkeys are confined after being captured, according to images supplied by ANI.

The attacks had been going on for three months, according to Radhakishan Sonawane of Lavool village, with the two monkeys stealing puppies and placing them on rooftops or other high areas.

“These puppies don’t get any food or water because they’re at such a high altitude. As a result, they died naturally a number of times. They did, however, occasionally die when they fell from a great height. In our community, more than 200 puppies had died “According to Sonawane, who spoke to Press Trust of India (PTI).

Some monkey species have a history of vengeance, either directly or indirectly. Researchers published a study in 2017 that looked at macaque social interactions. They looked at 500 hours of video, which included 15,000 instances of aggressiveness. They discovered that monkeys kept note of their associates’ actions and would seek vengeance.

However, it is unclear whether the monkeys in Beed district were killing dogs in retaliation.

Amol Munde, a Range Forest Officer, claimed he was aware of three to four incidences of puppies dying in Lavool after being abducted by two monkeys. He claims he was unaware of a dog killing a newborn monkey in the hamlet and hence does not feel the murders were retaliatory. “They look after the puppies. Puppies were once kept on roofs or in tall trees “He informed News18 about it.

“The puppies couldn’t thrive in such conditions because they didn’t have access to food or water. If a puppy managed to get away from the two monkeys, it would usually perish after falling from a great height.”

Villagers were fearful that once the monkeys had killed the majority of the dogs, they would turn on youngsters. People were harmed while escaping the pair of monkeys, according to Munde.

“People are terrified of monkeys because they rarely harm humans. In the last few days, some people have been hurt while fleeing these monkeys. However, no monkey bites have been reported in this village “He told News18 about it.